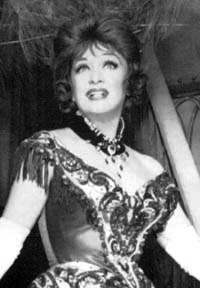 Numerous stars took on the role of Dolly in touring and regional companies of Hello, Dolly! after Carol Channing.
One of the more interesting stars was Eve Arden.

Eve Arden (April 30, 1908 – November 12, 1990) was an American actress. Her almost 60-year career crossed most media frontiers with supporting and leading roles, but she may be best-remembered for playing the sardonic but engaging title character, a high school teacher, on Our Miss Brooks, and as the Rydell High School principal in the films Grease and Grease 2.

Ironically,  one of Carol Channing's first jobs in professional theater was as Arden's understudy in Let's Face It, also starring Danny Kaye.
Decades later, when Carol had to leave Hello, Dolly! in Chicago to film Thoroughly Modern Millie,  David Merrick replaced Carol for four months with Eve Arden. Eve said the reason Mr. Merrick wanted her for this Dolly job was because she fit into Carol's costumes!

The cast embraced her immediately. While playing Dolly in Chicago, Miss Arden one evening experienced what is now called a "wardrobe malfunction" just as she started down the Harmonia Gardens stairway.
With perfect aplomb and the dry delivery for which she was noted, Arden stopped, said "Waiter, bring me some pins," and after putting her dress back in order, continued her song.
Also in Eve Arden's Dolly company was Danny Lockin (as Barnaby Tucker) who did 6 traveling tours of Dolly (as well as the film). Danny did it on Broadway with Phyllis Diller and Ethel Merman. In addition to touring with Eve Arden, he toured in productions led by Betty Grable, Ginger Rogers, Dorothy Lamour, and Anne Russell.
Audiences loved Eve and she received a Sarah Siddons Award in Chicago for Dolly.Eve Arden and Ann Miller had appeared together years before in Stage Door. They also were both critically acclaimed as Dolly. 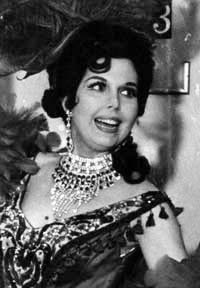 Johnnie Lucille Collier, better known as Ann Miller (April 12, 1923 – January 22, 2004) was an American singer, dancer and actress.
Ann appeared as Dolly with the Kenley Players in 1971. “John Kenley added a tap number for Ann Miller in ‘Hello, Dolly,’ ” said Patrick Quinn, a former president of the Actors’ Equity Association and a former employee of Mr. Kenley’s in Ohio. Mr. Quinn spoke in an interview in 2006, the year he died.
It has been a tough day in terms of finding anything on line on either of their productions.
I am seeking as much as possible on either of the ladies and their productions of Dolly! IF you have anything to share, PLEASE contact me! 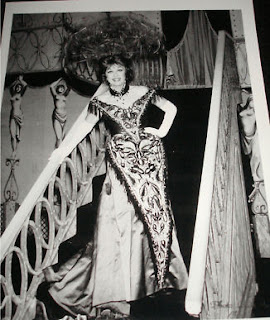 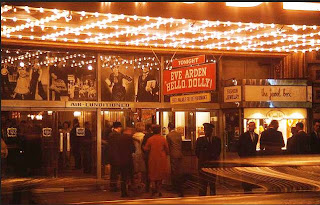 Tomorrow's blog will be... MY EXCLUSIVE INTERVIEW WITH JANICE HALL! 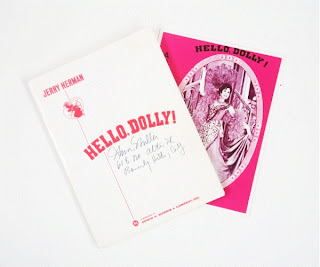 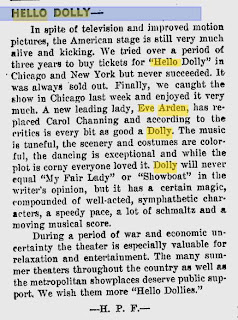 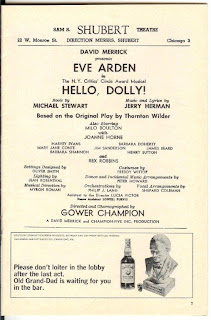 This Blog is dedicated to ALL the Dollys, past, present, and future and the gifts they give to the world

Posted by RichardSkipper at 7:39 PM