Happy Tuesday!
I hope this finds you living your dreams. I love the above quote. Once I took the focus off of me and placed it on others, my life turned around.
I hope you enjoyed my blog on Michael Colby yesterday. Today, I was invited to a read through of Michael's  Boynton Beach Club which I will be writing about on Thursday. I wasn't there to review it but rather celebrate a new musical and the rehearsal process.

Did you see Smash last night? I'm excited by the premise of this show, I'm excited by MOST of the casting. I'm not, unfortunately excited by the writing. I hope it finds its core and soars. I'm willing to wait till the end of the month before truly passing judgement on this show.


Someone who has definitely found her core and is soaring in "cabaret" is Pamela Luss.
You can see her yourself next month at The Metropolitan Room in New York. Saturday, March 3rd, 2012
Pamela with Houston Person
Just The Two of Us and Friends- a monthly Saturday series 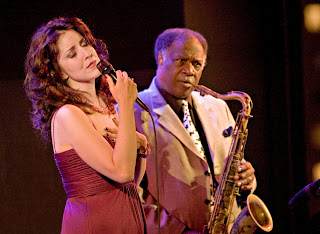 Check out her website for more details. In the meantime,today, I'm celebrating Pamela Luss!

It all started with Pamela when she saw Cats on Broadway as a young girl.


She saw Cats with her family. Her Dad and she were entranced throughout the show. She inherited her love of music from her dad, who plays the piano beautifully, so they often have similar reactions to music, be it instrumental or vocal.
Pamela was exposed quite a bit to the arts growing up.
As explained, her dad was musical, possessing perfect pitch. Her grandfather was a wonderful singer, who sang arias, and his brother presently teaches piano. Her sister has triplet teenagers, two girls and a boy. They are seventeen years old and have their own band. Recently, they were signed by Warner Brothers and will be coming out with a CD, so love of music seems to run in their family.

Pamela's dad introduced her to the American Songbook through Frank Sinatra, Ella Fitzgerald, Sara Vaughn and Chet Baker. Those were the sounds she grew up with in her home, not much pop, some Barbra Streisand, Marvin Gaye and Ray Charles. When her parents got married they had Count Basie and Joe Williams at their wedding as their band and its vocalist.  Her dad always loved Houston Person, so she heard a great amount of his music before she actually got to meet him and work with him. Her mom and grandmother were fine artists. Pamela's  mother was more interested in drawing, and most of her drawings were charcoals, and sometimes, she did watercolors. Pamela's grandmother was a marvelous painter, mostly portraits and nudes in oils. They both studied at the Art Students League and took degrees in fine art.  There was always a lot of art in their home, homemade and otherwise.

Tell me about your first time on the stage.
Besides being the only child who had two parts in Peanuts in the second grade, I appeared in Guys and Dolls in high School. I’ve always loved performing.

First professional job?
I did back up singing for a song in a Jonathan Demme movie.
Your thoughts on Arts in Education?
Arts in education is extremely important. Not only are the arts important, so much else can be learned through the arts, such as discipline, organization, patterns, and general knowledge. Obviously, the arts allow children to express themselves in ways they may not be able to in everyday life.  Furthermore, the school systems are too limited in their approach to education and overly focused on commercial success and competition such as science and math.  I feel very strongly about this because I believe there are different kinds of intelligences and talents that need to be explored beyond language and math.

What makes you cry out of the blue when you see or hear it?
I cry a lot at movies! I cry sometimes when I look at my beautiful, baby daughter or when she does something special.

Your thoughts on Carol Channing. (Because of The Dr. Carol Channing Foundation For The Arts, I ask about Carol in all of my blogs) 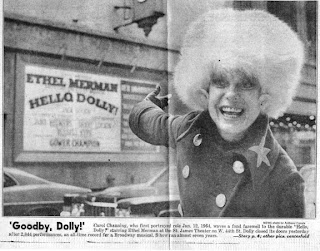 Carol Channing is one of a kind, making her irreplaceable and irresistible.  Her various talents and her intellect make her a most wonderfully unique performer and add to her specialness as a human being. She is a trouper, a survivor, and has always been extraordinarily charming and funny, despite many obstacles in her life.
Campaigning for Carol Channing to receive the 2012 Kennedy Center Honor in 2012. If you agree that she should receive this honor, can you say why you think this should happen.
I agree that she should receive the Kennedy Center Honor. It should happen because of all of the above, and she shows us what a legend truly is by making so many people happy over so many years.

Most recent appearance.
I was at The Metropolitan Room with Houston Person and my band performing the first show (shows will vary) in our monthly series Just the Two of Us and Friends. The first show was All about Love. We had a lot of fun thanks to the audience, who were just a terrific group of people. If we had an audience like that every month, we would be very lucky. I should add that to my three wishes below.
Next Appearance?
We will be back at The Metropolitan Room all at the very beginning of March, instead of February, and then again, at the end of March. Houston and I will also be at The Deer Head Inn with our band on March 17.

What is your biggest success in Show Business:
I appeared on the Jerry Lewis Telethon twice. I had the most wonderful time there. It was truly a great experience for me.

What was your lowest low and how did you surpass that
Although I may not appear that way, and I hope I don’t, I’ve had my share of adversity, so I can’t really single out one thing to tell you about. All I can say is you must overcome adversity because you don’t really have a choice. Here’s a quote I like by Carly Simon, “A really strong woman accepts the war she went through and is ennobled by her scars.” One must have resiliency, which I believe grows larger over time from adversity.  Khalil Gibran said something similar, “Out of suffering have emerged the strongest souls; the most massive characters are seared with scars.” I like that one; I think it’s really true.


If you are speaking about my career, I’d have to say, isn’t it always a slippery slope?
One day you are feeling up, and the next day – bad news. You really have to have the courage and dedication to hang on, no matter what comes your way. Ours is not an easy profession.

What one change would you like to see in today’s industry?
Well, for vocalists and I guess all artists, I would like to see an end to labeling. Truly creative and unique artists don’t really need to conform to labels. I think it’s a big fuss over something that isn’t important. If you could ask Picasso (if he was still alive), I think he would agree.

Who are your TOP FIVE models and influences as an artist
Houston Person is my mentor and has had an enormous influence on my singing and my career. Then, I would say Todd Barkin, who produced two of my albums and always had wonderful ideas. I am affected by all of the marvelously talented female vocalists I have befriended. I am most grateful for their friendships, support, and ideas. Finally, my dad as had the largest influence for me musically throughout my career and my life.
What do you think ultimately made you become a entertainer?
I love singing, and I’ve always wanted to be able to perform as a vocalist. I performed at some benefit shows at Weill Hall at Carnegie Hall where I met Vincent Herring. He gave me the opportunity and produced my first album along with High Note/Savant. I feel that was a beginning for me as a professional. 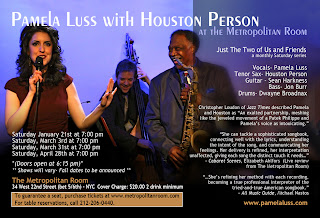 Yes, I am. I particularly love working with Houston and some of the other musicians I have been with for quite some time now, such as Jon Burr, who always makes it easier for me to sound and perform the way I want to.
Do you feel you have achieved what you set out to do?
Not yet - Barbra Streisand sang a song, “I Want Everything, Everything.” On a more serious note, I can only work hard and hope I can continue to perform and build a career that will be long lasting; that would be enough. I would really miss doing what I’m doing now.

What do you do to remain positive when life's hiccups get you down?
I think about all of the good in my life, and I have a little talk with myself.

If you had all the money in the world...that you needed...would you continue working?
Yes, of course, and it would be much easier.

A genie pops out of the lamp, he grants you three wishes. What are those wishes?
I would wish for three things: I would wish for a long, healthy, and happy life with and for all of the people I love.

If you could travel anywhere in the world and spend some time there, where would you choose, and what would you do? 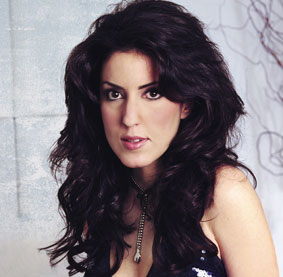 Paris, France. I haven’t been there yet, so I would tour and see as much as I could, especially all of the art, while I vacationed there.
What would you ask God if you could right now?
All of the above: A long and happy life with and for all of the people I love.

What is the last stage show you saw.
That’s a difficult question as I go and see/hear many shows.  If small clubs with stages count as stage shows, then there’s many. I saw a lot of the Encore Series at the City Center. Most of the time, I go to see other performers at the Metropolitan Room, Feinstein’s, etc.
What book is on your night stand right now?
Funny you should say on my nightstand. I have two that I’m reading on and off. One is A Promise to Ourselves by Alec Baldwin, and the other I’ve been sampling and starting to read, Nica’s Dream about a jazz baroness by David Kastin. They are both actually on my night table right now.

Thank you, Pamela, for the gifts you give to the world!


NO COPY WRITE INFRINGEMENT INTENDED.  FOR ENTERTAINMENT PURPOSES ONLY! 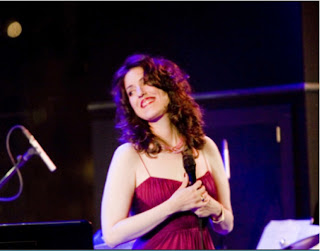 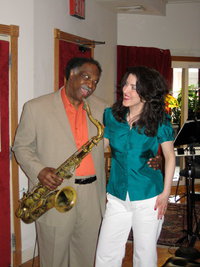 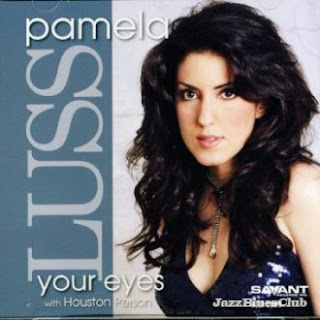 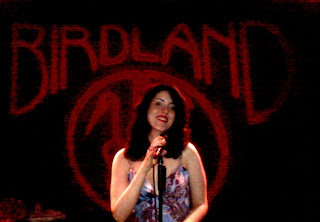 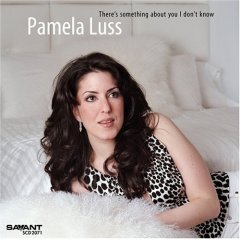 
TILL TOMORROW...HERE'S TO AN ARTS FILLED TOMORROW
Richard Skipper, Richard@RichardSkipper.com

This Blog is dedicated to Artists Everywhere! Thanks for ALL you do!

Posted by RichardSkipper at 6:21 PM